Mortgage rates back up as GOC bond yields rise

Global bond yield rates are up this month, and Canada is not missing out on the action.

The Government of Canada’s (GOC) five-year bond yield increased again this week, surging to 1.24% from the 0.85% of late September. This development adds to an already strong growth of over 75 basis points (bps) from the beginning of the year. The increase was expected to push banks into raising their fixed term mortgage rates in response - a surprise after mortgage rates were previously lowered just weeks ago - and now two major banks have made the first moves.

TD bank was the first of the major banks to hike it’s fixed term mortgage rates by 30bps last week, after having only lowered them two weeks prior. CIBC also took action shortly after TD, hiking its own rates 20bps to reflect the growing yields. All the other major banks, as well as smaller lenders, are predicted to follow suit in the coming days if they haven't already as they pass increased lending costs on to consumers. As yields continue to rise, mortgage rates will follow.

Though seemingly a small percentage, this increase in rates could cost a consumer over $10,000 over the course of a five-year term. That figure may only grow should yields continue their upward trend. And while $10,000 may be small in comparison to the total cost of a property, it could be enough to cause buyers to rethink their decisions on what they can afford. 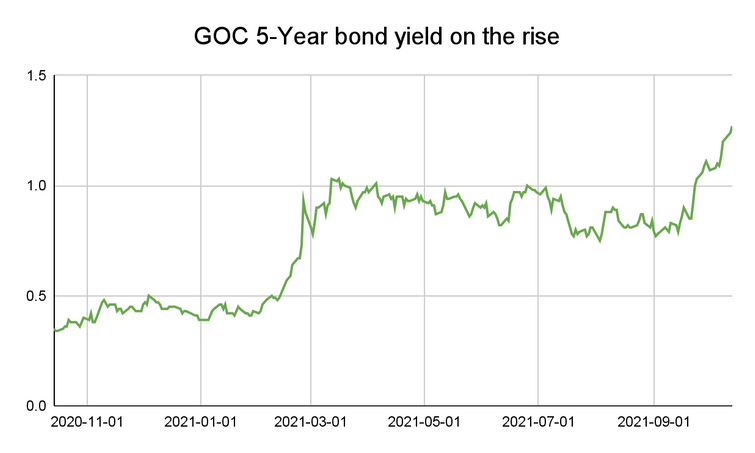 It was only mid-September when the major banks began cutting their mortgage rates suspecting a continuing low yield on government bonds. Now, as the price of funding debt is rising, they are seeking to raise the rates once again. Luckily, it’s predicted that mortgage rates will nonetheless remain relatively low for the coming months and into next year. Though if the past month is anything to go by, you can never really tell with today's market.

While most other GOC bond yields are on the rise, the five-year GOC bond yield is of particular interest as an indicator for changes in mortgage rates. However, the rate most directly impacts fixed rate five-year mortgages. A rise in this particular yield may push more consumers away from such mortgages and towards cheaper variable-rate mortgages that move based on the overnight rate, a figure set to remain steady until mid next year.